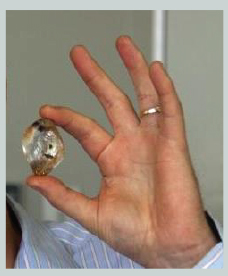 Vancouver, British Columbia–Rockwell Diamonds Inc., which mines alluvial deposits in South Africa, has unearthed a 287-carat rough diamond from its operations in the Middle Orange River region. Rockwell will sell the diamond, which it describes as being “tinted white,” at market value into a beneficiation joint venture with manufacturer Steinmetz and also will get money once the polished diamonds produced from the rough are sold.

“This 287-carat diamond is only the second rough diamond exceeding 200 carats produced by Rockwell in its eight-year history and is one of the largest stones produced in the Middle Orange in recent times,” said president and CEO James Campbell. Rockwell found the stone at the Saxendrift Extension property, which was acquired in March 2012. It follows the recovery of four diamonds greater than 100 carats in September.

“These results show that our plants are correctly geared for the recovery of large diamonds that characterize the Middle Orange River region,” Campbell said. “This is also a strong validation of our strategy to grow our alluvial production volumes … in order to produce large stones more regularly and improve Rockwell’s quarterly earnings performance.” The diamond is the fifth large stone recovered in the past three months, including the four pieces of rough weighing between 116 and 169 carats unearthed in September.

Campbell also said that the Saxendrift Hill Complex bulk X-ray operation is performing well with strong results and that ramp-up operations at Niewejaarskraal are ongoing, with the implementation of